Yellowstone premiered last night on Paramount Network. Rumor is Kelsey Asbille has a shower scene of some sort on next Wednesday’s episode but there probably isn’t any nudity.

Also hearing that Kaitlyn Dever just landed the lead in the upcoming Netflix series Unbelievable. There’s supposed to be some nudity in this role. If you want to know more about the true story this is based on, search for the article An Unbelievable Story of Rape.

"The Favourite" is testing - any info on the nudity/sex scenes?

This new French lesbian movie is a nice surprise

Name of the movie please.?

This is probably on regular tv in France.

(Another theatre nudity update so sorry) but I've done some digging regarding this play called "Reborning" which is currently showing until the end of this week at The Annex in Vancouver. I found a tweet from someone who'd seen it and they said that (in response to if there's profanity, nudity or violence), all of those are either featured or implied. Best part is the play stars Emily Bett Rickards (Felicity in "Arrow"), so if any Canadian friends have an opportunity to see the play, I'd suggest it as it has a very short run. (Just like to make clear still not 100% sure if Emily goes nude).

And by sell I meant swell. I can rhyme, but not spell lol

what about Breath : Elizabeth Debicki... has it released,, sh is nude in it !!!

I wonder how much of what we see is actually her here?? I doubt she was parading around naked in this scene ...

Janelle Monae is soooo lucky to much that carpet.

thats probably why she doesnt really do lit nude scenes that show her breasts. which is unfortunate, not everyone likes big boobs.

You can see her right breast in the screenshot posted right above you.

That's not what he meant by no tits.

From what we can see not even if the lights were on there'd have been tits.

Can someone post the brightened cap from Mr. Skin?

In the brightened cap on mr skin you can see in the frontal shot that she is naked. You can make out her left nipple pretty clearly.

do we have anything from Alison Brie in Glow season 2????

I believe it's already been confirmed that there's none from Brie... But others may be nude...

Recapped never said that Brie won't be naked. We just need to wait for their review.

Don't think it has been confirmed either way. Betty Gilpin was 'likely' to be nude in the 2018 rumors post. There's been no mention of anyone else, good or bad.

Anything ..ANYTHING on grace Gummer..??

Damn, I love her. And her sister. Anyone of them will do.

Another one of her boobs.

Any news on the release of Viena and Fantomas?

When is the world supposed to end? It’s coming out about a month after that.

Maisie Williams nude in the last season of GOT ?

Maisie and Sophie won't be naked on GOT and it's a known thing.
They have grown up on show and show runners don't want them naked.

Yes of course, from head to toe. Sources close to the production tell us that she got sick because of how frequently she was naked on set.

YES THIS HAS BEEN CONFIRMED TOO.

you just keep imagining that and settle in for a disappointment next year. This will not happen

Can't wait to see this year's lesbian scenes. Kate Mara/Ellen Page in Mercy, Claire Foy in Spider's Web, Anna Paquin/Holliday Grainger in Tell It to the Bees (actually I don't know if it has lesbian scenes), Chloe Moretz in Cameron Post, Alexandra Daddario in I Am Not A Bird, Keira Knightley in Collette, Elizabeth Debicki/Gemma Arterton in Vita and Virginia, Emma Stone/Rachel Weisz in The Favourite. Looks like the last 6 months will be good. I hope C. Foy has nude scenes.

I don't want to get my hopes *too* high for an Alex DD lesbian scene in I Am Not a Bird.

I was lucky enough to catch a screening of My Days of Mercy recently. As detailed in a previous recapped write- up, the nudity and sex scenes from Kate and Ellen are legit. Looking forward to news of wide release so I can catch it again.

According to the show runner the casting for Witcher will begin soon, any info on roles that require nudity?

In the witcher, basically every female could have nudity if the showrunners want. In the series, the sorceresses are basically ninfos, and Geralt gets plenty of chicks, but for the main roles, and not knowing who is going to be in the first season, if they adapt the first book, Yennefer should be naked.

Looks like Tania Raymonde had her nipple pierced in Goliath S02E08 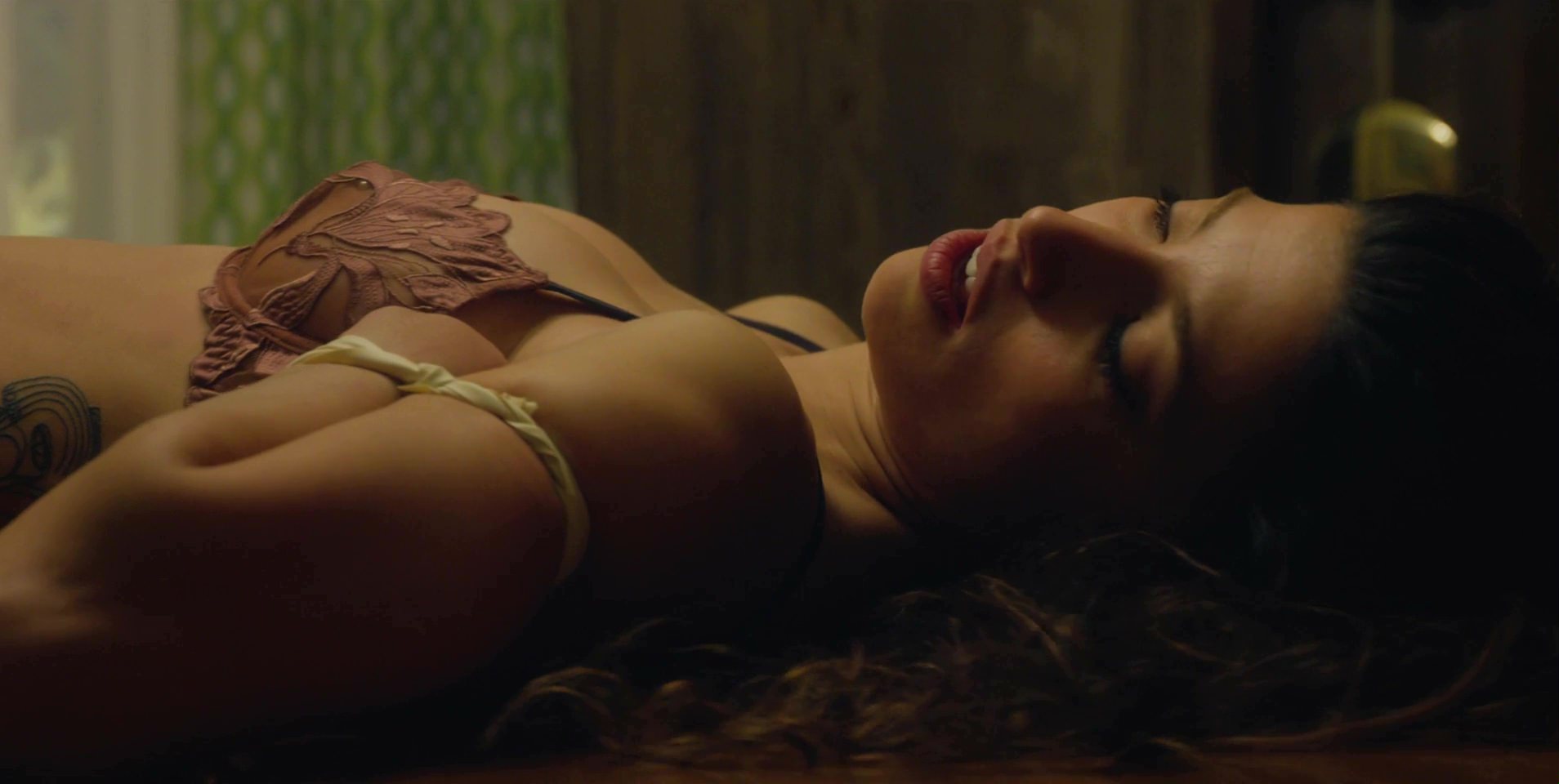 aaaaand that's about as much as you going to get as nudity ... female that is ... there's male dick in it 🙁

Male dick? So no female dick, then?

Are you assuming peoples genders ?

I so hope it's Bella.My fingers are staying crossed until it happens!

Has anyone been able to confirm whether or not the tit was aired uncensored on TV for the Yellowstone premiere episode? It looked censored on my TV but it is also hard to see on the online version so maybe my TV color was not bright enough.

Just making sure, you saw it on TV or watched on the internet?

It is also very apparent in freeze frame including a nice shot of her stomach and pelvis as she arches back against the wall.

Okay I rewatched on my TV and and messed around with my picture coloring and I am pretty sure I could see a nipple...just barely. I think it may have aired uncensored but in order to see it you need to watch with the correct lighting.

Watched it live on Paramount TV.

I cannot confirm as it wasn't live when I watched it. The Paramount site has the episode and it says UNCENSORED. So this to me implies that it was censored live. But that might not be the case. It's not like it was anything special...unless it was uncensored of course. Then it's nipple on commercial cable. That IS something special.

Could someone screencap that then? Because all the gifs and pics of it I've seen as yet have had no nipple in them. Even though enough tit was exposed given her nipple placement that we should've seen some.

This is from the Amazon version:

The part I was referring to has now been added to the images.

It is after the sex scene before she gets up when her nipple is shown most clearly at the bottom of the screen.

Still hope for some kind of nudity from Kelsey Asbille.

Not expecting nudity, but anything hot in Luke Cage season 2?

Only seen episode 1 so far but there’s a sex scene with Luke and Claire (Rosario Dawson). Both naked but you only see his ass

This might be a stretch ... but nudity in the spy who dumped me?

Oh boy, if Kaitlyn does indeed get nude in the role we are in for a treat. She has grown up into a gorgeous woman.
I wonder if her getting cast in this means she won't be in Last Man Standing when it comes back?

Any details about Kelly Reilly's bath scene in episode 3 of Yellowstone?

My god, I had almost heart palpitations when I saw Kaitlyn Dever name here. She's freaking beautiful. Many thanks for that news!

And fingers crossed for at least some butt shot in that shower scene from Kelsey.

Not sure what to make about nudity in something about rape.

Dude as long as it's done in a hot way so the SJWs all die and then we can go back to the good old days, when the simplest way to get gratuitous nudity n a movie was rape...see Death Wish 3.

You want them to depict a rape in a way that is really hot and is also able to cause a group of people to die and send us back in time? I feel like you’re asking for a lot here. Most people just hope to see some tits at some point.

It tells the true story of Marie, a teenager who was charged with lying about having been raped, and the two female detectives who followed a twisting path to arrive at the truth.

Here is the actual story... she was a weak, troubled women just entering her adulthood after a youth in the foster system. She'd been traumatized her whole life, and was traumatized again after a brutal rape. But when she reported it the police investigated her instead of the crime, and she backed down when interrogated, and wrote a statement that the story was a lie to end the ordeal. But then she was charged with making a false claim, and the rapist was never investigated. The rapist went on to become a serial rapist in Colorado, and she was his first victim.

That seems much more likely and less controversial.

I’m saying they aren’t changing the story to make it less controversial. They are just telling the story as it happened.

What's your point? There are also true stories of women falsely accusing men of rape that could be TV shows. Such a show would be more controversial hence my previous comment.

Well, its a true story.